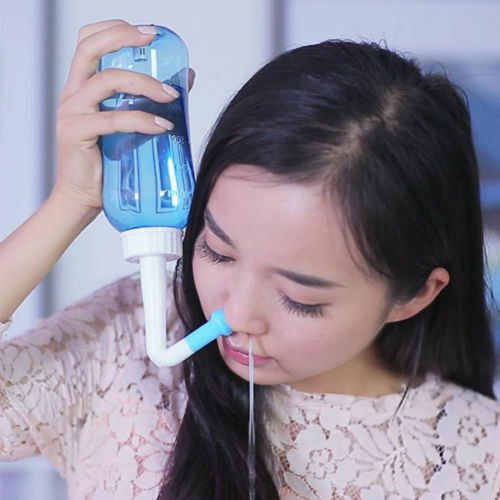 One of my friends was an asthma patient for a long time and everyone in her household knew what meds to give her and how to treat when she had an attack. One day, she was finding it hard to breathe and within minutes she passed away. Somehow, this incident got etched in my mind and I used to fear nasal blockages & breathing troubles after that.

Sharing what I heave learned in the process

Anyone who has had a baby in the current generation would know this.

I was scared to use the Neti-pot till I saw this video of a mother using the saline spray for her child, who does it very easily and we can see the relief in the child’s face.

Now, every parent would have gone through addressing nasal blockages for your child in a variety of ways. From steam inhaling, applying Vicks vaporub, blowing out their noses, giving nasal saline sprays etc.

Do those around you know how to treat YOU when you are gasping for breath and have not cleared your nasal blockages in a while. I went through it and was not prepared. Sharing what went wrong and how we came out of it.

I had been ignoring my cold and had done steam inhaling with a few drops of eucalyptus oil in the morning. Both my nostrils had been severely blocked, but as we had to focus on our daily chores, we kept ignoring it (like any other parent). Suddenly, I felt out of breath and my mind instantly recollected the incident about my cousin and I started panicking. The more I panicked, the less I was able to breathe. My husband asked me to tell him what should he do to help quickly (quick home remedies) and I could not speak to tell him. My son, who had read a book about a kid who had breathing trouble just a few weeks back (what a miracle!), mentioned that hitting the upper back helps. It did and I was able to speak. Then, took a few deep breaths and told myself to calm down. When mind is calm, you can think and act clearly. Salt helps changes the equation of the water in the body. So, asked him for a pinch or two of salt. Gulped that down. HUGE relief. Was able to move around and speak normally, knowing very well that it might happen again pretty soon. Then, went to the local medical store and got a nasal drip (Zicam). Apparently, it is saline water (salt water). Sprayed it in both nostrils and could sleep properly.

Next day, we went to the physician. She explained that it was dangerous to ingest salt to treat the phlegm during an attack. Instead mix salt with water and drinking it or spraying it in the nostrils – any of these two would be the best option. As I had ingested just a few pinches of salt, it was safe and I could feel better instantly. More of that could have been fatal as well.

Our biggest take away from this incident was to get educated and train those around to have basic first-aid skills for most common health issues.

One thought on “Nasal blockages and breathing trouble”